My new DomLovesMary font is days away from being released!  Because it’s been created in memory of my in-laws, Dominic and Mary Sementelli, I thought I’d share some things about these two people who were an incredible blessing in my life.

Today, it’s “Something about Mary”.

Mary was, in Texas terms, a “hoot”.  She was all of 4’11” in heels but commanded a room like she was six feet tall

Mary, top left, with her girls at the beach.

Born in New York, she eventually moved to Erie, Pennsylvania.  She had gal pals galore that she stayed friends with all of her life.

Mary, on the far right, with her girls at “The Town Casino”

Mary, on the left, with her girls at “Lorenzo’s” night club.

In their single years, they loved to to  go to night clubs with that cool 40″s vibe like “The Town Casino”, “Lorenzo’s” and “The Chez Ami” in nearby Buffalo, New York.  Dressed to the nines , they’d have cocktails and dance to the music of great bands.

On one of those occasions, she was intrigued with a strong, handsome man named Dominic.  He was her opposite to be sure.  The strong, silent type, he didn’t like the spot light on him.  But he loved her spunky personality and was happy to let her shine.

After several years of courting,  she was finally ready to settle down.  She was 30 years old, unusual for that time.  But she had waited for the best:)

Mary always had great taste and was always thinking ahead.  She purchased this Heywood Wakefield bedroom suite, that now resides in the guest room of our home, a year before her marriage.

On  September 6, 1953, on the arm of her brother, she entered  St. Paul’s Catholic Church in the “little Italy” section of the city to marry Dominic Sementelli, the love of her life.

Thirty one years later, Michael and I said our vows there as well.

This is a sample of my soon to be released fon “DomLovesMary” in use with special flourishes and “Add on” word.

The font family features three different versions of the alphabet, a set of “Add Ons” that will include words like “and, to, of, for, at, etc…in addition to 124 flourishes to be added to either the upper or lower case so you can create your own custom look!

It will be released on October 30 at myfonts.com on my Correspondence Ink foundry page.

I’ll be sponsoring a give away of a wedding item using the DomLovesmary font on Brenda’s blog soon.  Subscribe to my blog to get the details.

In the meantime, my first cursive font, Belluccia is still available at myfonts.com and fontbros.com..

Belluccia was named one of myfonts Most Popular Fonts for 2011.

This is a sample of my new calligraphy font, DomLovesMary, that will be released within the next week!!

It’s been a long time in the making ( since May) so I am very excited to share it with you.

It will be available for purchase on myfonts.com at my Correspondence Ink Foundry. 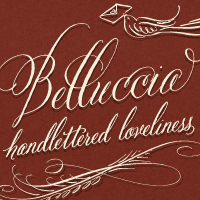 My first calligraphy font, Belluccia, is also available at my Correspondence Ink Foundry.

So you can check out both at the same time.

I’m also very excited to have a new website that includes this blog page.

Until I get this new blog going, please click here to go to my current blog and find out what else I’ve been up to!