Hey friends.  It’s time for another How to tutorial : Bringing glyphs into Photoshop.

Have you ever wondered where you can find all the extra letters and flourishes that font designers create that can’t be accessed by the keyboard?

Well, they are stored in something called a “glyph panel”.  This panel contains the total of all of the letters, flourishes and ornaments that are included in your font.

Since there are only so many keys you can type to create words and access everything contained within a font, the rest of the characters have to be stored in the glyph panel.

In Adobe Illustrator and InDesign you can access this panel by creating a text box then clicking on “Type” then “Glyphs “.

So you have two options.

The first one is to purchase a software app called “PopChar“.  I have it and love it.

But in order for it to work with a font, the font has to have been uni-coded by the designer.

( You can bet my calligraphy fonts, “Belluccia” and “Dom Loves Mary” are!)

The second option involves accessing the glyph panel in Illustrator or In Design then placing the file in Photoshop.

That’s the process I describe, step by step, in my video.

So if you’re one of those people who’ve been wondering about this topic, take a peek and let me know if it helps!

If you have other questions about working with fonts, let me know.  It may be the topic of my next video!

As always, my calligraphy fonts, Dom Loves Mary and Belluccia are available.

You can purchase them here.

Have a Technical Tuesday 🙂 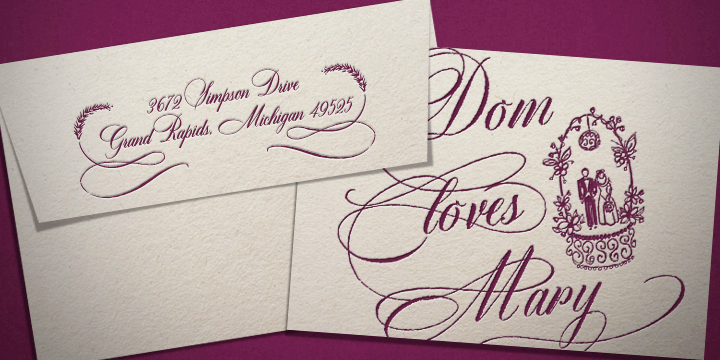